Kelsey Shea is the Manager Director of Armonk Tennis Club and Armonk Indoor Sports Center. Responsible for the day-to-day operations of the clubs, she serves as the organizational head for clients and staff.

Kelsey started at ATC as a camp tennis coach during her high school and college summers. She then became the primary tournament director, running USTA-sanctioned competitions for all ages and levels. Outside the club Kelsey is a high school tennis coach, having started at Sacred Heart Academy in Greenwich, CT. Since 2017, she has coached the varsity girls team at Rye Country Day.

Kelsey graduated from Colgate University in 2014 with a degree in Economics. She played four years of Division 1 tennis for the Raiders, occupying primarily the first and second singles and doubles positions for the latter half of her career and earning Patriot League All-League recognition.

Doug Sherman is the Tennis Director for Armonk Tennis and Armonk Indoor after holding the Senior Professional position at the Saw Mill Club from 2002 to 2008. In addition, he was the Head Professional at Seven Bridges Field Club in 2002 and 2003, and at Chappaqua Swim and Tennis from 2004 to 2007. Doug has also been involved with the USTA as a Recreational Coaches Workshop Trainer and the Competition Training Center Head Professional.

Doug received his BBA in Hospitality and Tourism Management from James Madison University in 2001 after being named the school's Outstanding Scholar Athlete in both his junior and senior years. He reached PTR Professional standards in 2002.

Greg Anderson joined Armonk Indoor in 2011 and became Academy Director in 2015. He is originally from Johannesburg, South Africa, where he began playing tennis at the age of four. He competed in national tournaments throughout his junior career and climbed to the top of the rankings in the U12 through U18 age groups. He was then recruited to play Division 1 tennis at the University of Kentucky and later Morehead State University, where he earned First Team All-Conference, Team MVP, and Academic Recognition honors during his career. He holds a bachelor's degree in Exercise Science.

Professionally, Greg has also acted as hitting partner and strength trainer for his brother Kevin Anderson, who has reached a career high of #5 in the ATP World Tour rankings. This experience has made him very aware of what it takes to succeed at the highest level and what aspiring tennis players should work on to get there.

Jaklin Alawi comes from Sofia, Bulgaria. As a junior, she was ranked as high as #170 in the ITF and #800 in the WTA. With three ITF junior singles titles and two doubles titles, Jaklin was the top-ranked U16, U18, and women's player in Bulgaria. She placed seventh in the European Summer Cups in both the U16 and U18 divisions and went on to lead the Bulgarian Fed Cup team.

Pursuing a college career in the United States, Jaklin began at Long Beach State, where she was the 2010 Big West Freshman of the Year and a two-time All-Big West selection while helping the team to its eighth appearance in the NCAA Tournament. She then spent two years at the University of South Carolina, earning All-SEC second team honors twice and reaching a national ranking of #33 in singles. As a senior, she was named team MVP before graduating with a degree in Political Science.

Jaklin has extensive coaching experience to match her playing experience. She was the assistant coach of the women's team at Florida International University, taking the program from unranked to #42 in the ITA 2016 rankings. The team reached their conference finals and had victories over top-40 teams Yale and Georgia State. Jaklin has also trained top-flight ITF juniors and women on the WTA circuit.

Angus Thomson is from Brisbane, Australia. He began playing tennis at 5 years old and became one of the top junior tournament players in Australia. After deciding to pursue an education in the U.S., Angus played for two Division 1 programs. He played his freshman season at the University of the Pacific in Stockton, California, holding the #1 doubles spot. Angus then transferred east to Robert Morris University, where he played three seasons at the #1 singles and doubles spots.

In addition to being a strong junior and collegiate player, Angus has much experience coaching all levels, from pee-wee through adults. He spent two years at Lifetime Tennis Academy in Brisbane and was the Assistant Tennis Director at Future Stars Summer Camp at Purchase College SUNY.

Ema Dancetovic is from Belgrade, Serbia, where she reached #9 in the European U-14 rankings. A graduate of Northwestern State University, Ema was twice named to the Southland Conference all-academic first team. She also was a member of the all-conference singles first team and all-conference doubles first team during her career.

In addition to her collegiate experience, Ema also competed in ITF tournaments in Europe, reaching as high as #1203 in singles and #1054 in doubles in the WTA rankings. Before joining Armonk Tennis/Armonk Indoor, she served as a coach at Future Stars Tennis Camp.

Marc Farrell grew up in Pleasantville, New York, where he began playing tennis at the age of five. He competed in numerous tournaments as a ranked junior until graduating from Byram Hills High School. While at Byram Hills, he played on the varsity team for all four years and was captain during his junior and senior years. He then graduated from the University of Rhode Island with degrees in Sociology and Business.

Marc has been working at Armonk Tennis since 2010. As a certified teaching professional, he loves teaching players of all levels, from juniors to adults. His previous coaching experience includes being the Assistant Head Professional at the Whippoorwill Club for four years. Currently, he is also the Director of Armonk International Tennis Academy's junior summer camp and coach of the Northern Westchester Junior Tennis League team.

David Margi Vianova is from Spain, where he achieved a top-five junior ranking while training under Jofre Porta and Toni Nadal (coaches of top-ranked players Carlos Moya and Rafael Nadal, respectively). After various shoulder injuries, David decided to leave competing and focus on coaching. In addition to developing top competitive junior players in Spain, he worked as a hitting partner for many ATP and WTA players and founded the Global Tennis Academy in Madrid with his brother.

David then joined his wife in the U.S., where he has worked at The River Club of New York, the Jupiter Island Club in Florida, and the Belvedere Tennis Club in California. David works with players of all ages and levels, and is excited to help players reach their goals on the tennis court.

Originally from Zambia, Africa, Webster Munyenyembe trained for nine years at the ITF Tennis Center in South Africa. He was a highly ranked national junior player, played on the ITF Circuit for three years, and was a member of the Zambian Davis Cup team. He moved to the U.S. to play collegiately, first at Graceland University and then at Iowa State, where he graduated with a degree in Computer Engineering and Science.

After working for a few years in a profession related to his major, Webster decided to return to his passion of coaching. He is a certified PTR and ITF professional and recently worked at Pelham and Brae Burn Country Clubs. He is well versed in the USTA Quick Start program and has extensive experience working with high-performance juniors.

David is from St. Albans in England. He teaches at Armonk Tennis and Armonk Indoor during the indoor season and is Tennis Director at Tamarack Country Club in Greenwich, CT during the summer. He was previously the first assistant to the tennis director at Old Oaks Country Club in Purchase, NY, as well as the Director of Tennis at the Tennis Club of Hastings. In his three years at TCH, David oversaw the re-emergence of the club after Hurricane Sandy, helping grow the adult program and annual membership, and increasing the junior program to over 180 children ranging in ages from 4-17.

A little-known fact about David is that he was a fully qualified British tennis official and officiated at Wimbledon from 1999-2003. 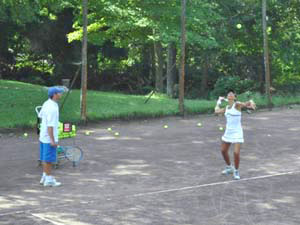 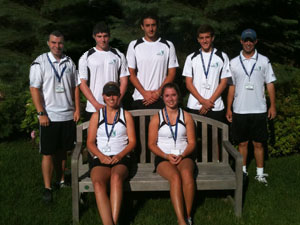